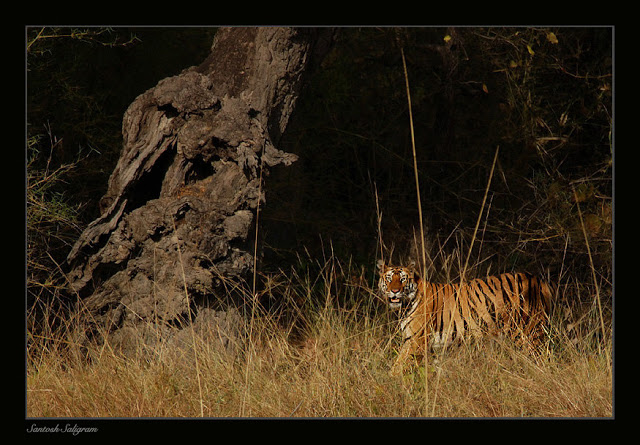 Tigers have been for millenia strongly associated with myth, religion and spirituality, particularly as the steed of Goddess Durga, the destroyer of evil.

Ancient peoples of the Indian jungles believed tigers to possess supernatural powers, and revered them for the same as divine protectors against unforeseeable calamities. In fact the Bhagavad Gita professes such: “Do not cut down the forest, for it is the protector of the tiger; do not kill the tiger, for it is the guardian of the jungle.”
Such early understanding of the tiger’s importance in the health of the eco-system is intriguing to study, especially in this era of rank apathy that is partially a product of misplaced economic development and human greed. In this image I intend to portray the tiger as andhakaaravinaashaka (the eliminator of darkness), through the manner in which the portion of the frame in which the tiger stands is bathed in resplendent sunlight while darkness prevails everywhere else.