Skip to content
Laden low with forbidding luggage, and yet as sprightly as a fowl by day I was on my way out when without warning the whistle on my lips went off-tune upon the grisly sight of my neighbour, and I mean the whole century of kilos of him. His thick hair making an unsightly peek through the netted vest on a hirsute chest and carrying an enormous paunch that obscured the groin to the back of beyond, two tree-trunk-like legs visible from below his meagre wraparound advanced menacingly toward me, and entering earshot, this creature threw open his verbal gate and sputtered: “Where are you off to, you chimp-faced lamebrain?” I, on my part, received the unfriendly inquiry while noticing that this verbal emission was accompanied by the discharge of copious amounts of betel leaf juice even as a used toothpick emerged from between his fingers and went straight in to the oral works.
Not a good beginning to a quest far removed from neighbours and intended more on the lines of tigers, but the creature was there and breathing down my neck, so quite unable to ignore him, I stuttered “Oh, Hullo there, Uncle; I’m off to photograph big cats!” in the most genial way I could muster under the discomfiting circumstances.
“Cats, what?” he growled emitting a shrill laugh that was closer to a hyena’s hysteric chatter than an infant’s musical note, and I was just about to furnish the definition of the term with some emphasis on the adjective in it when I was impeded by the unhelpful development that he had resumed talking and held scant interest in lending me the ear.
“Why, you love snapping them cats and dogs, do you!” he cried in a pitch so high that his voice could comfortably touch the tip of the London tower and ring the bell at its cornice. “Then why go anywhere at all, son? Plenty of dogs this street got, let me show you, come!”
At this point, he seemed to be having a sort of orgasm that lasts longer than the conventional type, and the wave of mirth got so overwhelming that the line between uncontrollable laughter and the initial stages of a heart-attack seemed to thin considerably, and I began worrying about access to the nearest hearse van centre to dispatch the mortal remains of this now lively thing, should he succumb to his amusement and kick the bucket at my very threshold.
Now, we’re told to love our neighbours, but they regularly scale such unthinkable heights of repugnance and are so consummately concomitant with dread, that even the seemingly simple act of tolerating them must make the worst rogues of us deserving of a national award for peace. But neither in the mood to play the gentlemanly version of a Miss Universe going on a safari of street mongrels, nor fostering the wish to assume the responsibility of couriering his corpse to the morgue, I sequestered the self between the pillar supporting the porch and the hindquarters of my hatchback parked in the portico, slunk out through the narrow gate on the west-side and legged it, while hoping that Father would hold fort.
This worked rather resoundingly well.
A week after the trip, I was nursing a goodish-sized print of the rusty-spotted cat image seen above when the neighbour of the given specification barged in with the same level of formality as a troupe of black-cats breaks into a hide-out.
“Oh, hullo, sir!” I greeted in a tenor of reasonable cordiality.
“How do, chump?” he barked, and noticing in an instant the print held in my hands he was at once reminded of my recent whereabouts. “So you went all the way to shoot a small little cat on a log, did you?” he roared, “Didn’t find no tigers, eh? I told you you could well shoot them cats in my very yard, I did. What a waste of time! Take a tip, son. The next time you want to look for tigers, try the local zoo! Ho ho ho!” and slipped into a pale of laughter with eyes wide shut as of one who has just been tickled in the tum.
This peeved me, and I muttered under my breath “If I wish to find anyone at the zoo, it is you!”
“Say what?” the monster queried, and there was a dam ready to burst inside me if I didn’t repeat the curse louder for the audience to hear.
But there were better ways to deal with this fire-spewing behemoth than hurling back a caustic remark or two of defence, so I took a mental swig of the Scotch on the table, set my brows at the apt angle and striking that delicate note between response and retort, I introduced a modifier: “Why, sir, I did find tigers!” and pulled out a print of the visual exhibited below and held it point-blank. 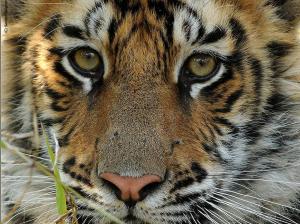 I wished it was big enough to drown me.