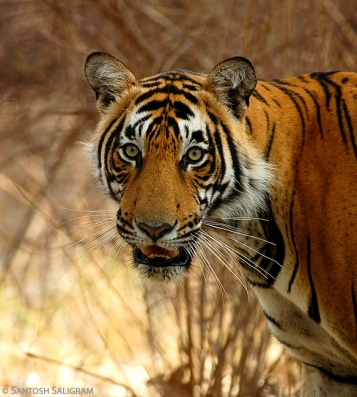 The Kachida male cub is a part of a litter that exhibited compellingly intriguing behaviour in the summer of 2008.

Aditya Singh of the Ranthambhore Bagh reports that this litter of two and a half years had split from their mother last winter but lack of wide-spread availability of water and other essentials in the summer drove them to actually re-unite with their mother and share the precious resources amicably together.

This once again brings into focus the antediluvian question of how social tigers are, and even though the popular notion is that they are fiercely solitary, such instances serve as a compelling reason to revisit that conception.

Stephen Mills explains in his book titled ‘Tiger’, that because tigresses occupy areas close to their mother’s home range upon reaching adulthood, the females in a larger range are likely to be siblings or cousins, and tolerate each other significantly, sometimes even allowing each other to hunt in their domain. They come in regular contact with one another and even though such meetings are often tense, they are reasonably amicable, the rationale being that there is more to be accrued from cooperation than mindless conflict. So, effectively, they are living in a “larger pride” which is spread out considerably in the absence of the need to hunt together (as their prey animals are significantly smaller than the lions’ on the African plains) and cannot, therefore, be termed entirely solitary.

The role of males in rearing the family, similarly, has been in the past grossly underestimated, and extensive research has shown that they may spend significant time and energy in watching over and protecting their family. Some males have even been observed tolerating their cubs’ uninhibited play and presence at the dinner table! As the world’s most enigmatic mammal, every aspect of the tiger inspires imagination and conjecture, but I suspect that no matter how much we attempt to dissect its private life, the tiger will always remain an inscrutable conundrum. Humans can kill tigers, but not their magic.