Skip to content
The ride was penultimate, the time was short and my dubious record of having not made for my library even one image of a tiger crossing a clear jeep track scorned at me with a perfectly detestable air of surety about its continued reign on my haplessness.  Mukesh’s intuitive style of work was my only hope if even at this ripe a stage I were to pull off the implausible in such a crowded park.
The Jhorjhora cubs had failed to show up at Rajbehra that Monday morning, so several vehicles had gathered at Andhiyari Jhiriya instead to try to show their guests one of the Mirchani males (we didn’t know which one), who was reported to have returned to the hill-side of Andhiyari after having spent two or three days with his brother on a kill first by the Damnar stream-bed, and later in the patch of forest between Damnar and Hardia.
At 08:00 a.m.we heard the first chital calls, but only briefly, indicating that the tiger had moved a short distance but had sat down again, possibly either to avoid tourists who could be heard well nigh from Anglia, or to rest from the sapping heat. The armada of vehicles moved back and forth a few times to see whether they could catch a glimpse of the cat but the foliage in Andhiyari being quite dense, they failed to spot anything in the thick bush. There was no further activity for another five minutes and several vehicles decided to migrate to greener pastures.
At 08:05 a.m. calls were transmitted again by Messrs. Predator Intelligence Service, indicating that the tiger had resumed his walk towards the road.  Now to my utter surprise and secret delight, despite hearing the alarm as clear as one would a factory siren when well inside the plant premises, some continued to drive away, leaving us with the delightfully scant company of merely two other vehicles – a luxury even rarer than derriere massagers.
Mukesh, however, was not to be sucked into the herd. He was absolutely certain that the tiger would sooner than later descend to the road and cross over to the grassland, the marshy edge of which we knew the brothers liked to cool off in. His sureness was fondly reminiscent of Ram Avatar’s dour adamance when we were tracking Bokha in the winter of 2007. If that was a stroke of genius, this was a labour of common sense, focus and patience.
Three minutes later, we first spotted a tiger on the carpet of dry leaves, the absence of a crowd probably encouraging him to walk fluently, without a pause, like the water of the first monsoon rain advances down the dry channel of a seasonal forest in Ethiopia. It was Mallu, the shier and larger of the two brothers, and he stepped onto the track and set fire to it.
Then he took a few measured paces to remind me that, accompanied by his grace and never abandoned by his panache, a tiger never walks alone. 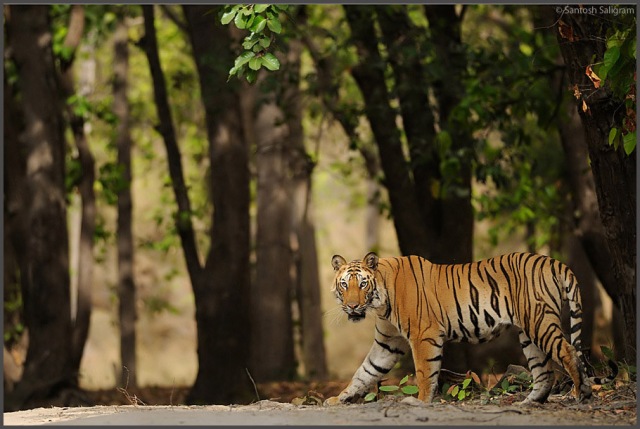