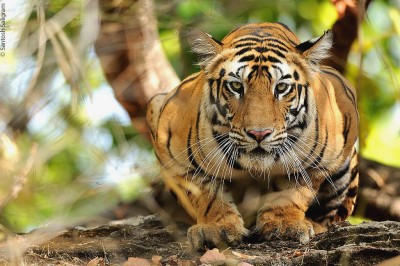 I’m pleased to announce that this image has been chosen as the winner of the NDTV Tiger Photo Contest from a whopping 6000 entries, and will feature in their 2011 calendar.

In connection with this, I was featured in a brief interview with NDTV anchor Swati Thiyagarajan on their mega 12-hour ‘telethon’ yesterday on NDTV 24/7, NDTV India, NDTV Profit and NDTV Good Times. Appearing for the first time on live national television was a terrific experience, but so was meeting Shekar Dattatri and the great Dr. Ullas Karanth on the breezy and picturesque banks of the Kabini!

Click here to watch the video of my interview.

I’d like to thank my family, friends and followers for all the good wishes and kind support, as always my naturalist Mukesh and driver Vikas, and Aircel and NDTV for the noble initiative and the valuable recognition.

Thanks also, not the least, to all who waited patiently to catch me on television, and thanks, most of all, to the great tigress featured in this picture, who is a true survivor and to me, just as the judges said, encapsulates everything that the beauteous, dignified, soulful, tenacious and the most charismatic animal the world has ever known, epitomizes.

To read the story behind the image, click here.