Skip to content
If you haven’t read part one, you’re missing the entrée.  Read it here.

Predisposed to making the most of our maiden Africa trip and buoyed further by the captivating scenes we had witnessed in the evening, we slept light and were up early next morning, promptly huddling into the safari vehicle for a punctual start at 6:30.

Everything I had seen, read and imagined about the magical and photogenic Africa mornings filled my doting eyes as we stepped out of the fenced area of the Amboseli Serena Lodge on our first morning safari on the continent.

The timing was perfect.  A brilliantly orange sun peeped up the horizon turning the low-hanging clouds into magic lanterns.  Zebras walked a bushy meadow, their grizzled mane silhouetted against the diffused fireball and glowing with an aureate halo, and their hoofed feet raising small puffs of gold dust from amongst the otherwise luxuriant grass.

A handsome representative of the Grant’s Gazelle was then encountered.  With the sun behind us, his body glistened in soft radiance reflecting his gentle nature, the buff grass dual-toned by the bluish haze of the distant volcanic marshes.

As we carried on, the sun used his paint brush to poke through the clouds and burst out painting the sky at first a warm pink and then a fiery orange as is his wont.  That’s when we saw our first elephants of the day – a duo making its way across the plains with silken grace, this invigorating sight having the same effect on us as a generous dose of morning caffeine: 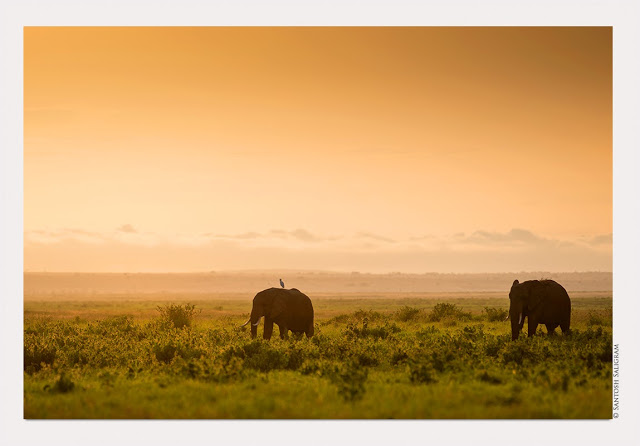 We advanced to find more caffeine, and after navigating through a large herd of Burchell’s Zebra, wildebeest and an assortment of large birds including the Egyptian Goose and the Grey Heron, landed in the midst of a galactic herd.

In my visits to some elephant-dense areas of India, most notably the Kabini part of Nagarahole National Park and the Dhikala grasslands of the celebrated Jim Corbett Tiger Reserve, I’ve had some exhilarating moments in proximity to these large mammals in numbers that would be considered close to jaw-dropping even for deer.  But, here in Amboseli, what we had hit upon was an unprecedented level of pachydermal abundance.

Individuals of various standing – physical and societal – some large and some barely reaching the bellies of others, some mischievous and some solemn – grazed, dusted, bonded and played away merely metres from the vehicle track.  Best of all, never before had I felt so good to be completely and utterly ignored – every elephant was decidedly indifferent to our presence so that I came under the illusion of being clothed in an invisibility cloak and perched on a broomstick.  For the first time, I didn’t feel like a distinct watcher but rather curiously, like one among the watched.

While I hear your objection that I couldn’t stack up physically to these giants, I may clarify that the complete disintegration of a psychological barrier certainly gave me the warm feeling of inter-species belonging, even though our driver repeatedly relayed the warning “elephants no joke.” [sic]

Well, yes; there was nothing funny about them!  Instead, there was everything extraordinary – extraordinary that we, powerless and vulnerable, could be in the midst of about 600 tonnes of scimitar-toothed, trunk-legged, turbo-powered, moving mass, without ever being reminded of the frailties of life or the possibilities of afterlife. 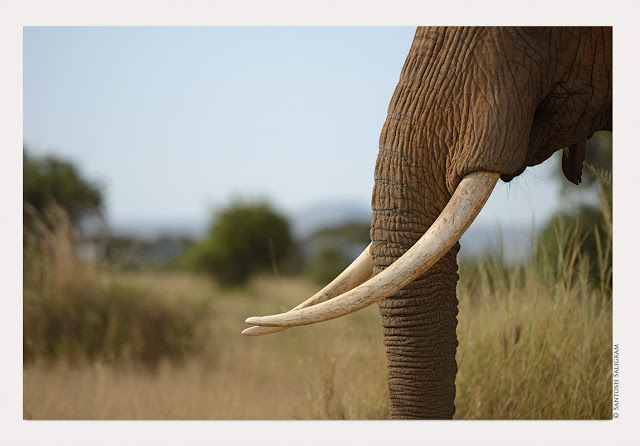 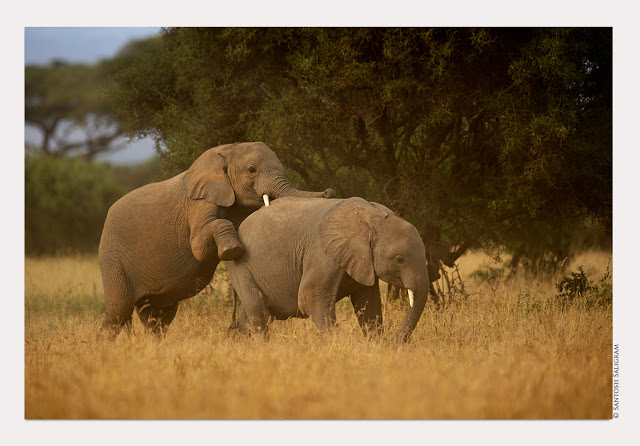 All this excitement had obscured a telling fact – that by far the biggest giant in Africa had not shown itself yet.  We probably wouldn’t have felt terrible about it, in light of all the wonder that had touched us that morning.  But the clouds, which had kept it shrouded for more than 24 hours, parted at last for a precious few minutes to reveal in all glory Africa’s tallest lone-standing mountain and the protagonist of my favourite African song, the Kilimanjaro, giving us thereby a rather anticlimactic “oh, hullo!” moment.  And with two elephants giving it a guard of honour, it looked like this: 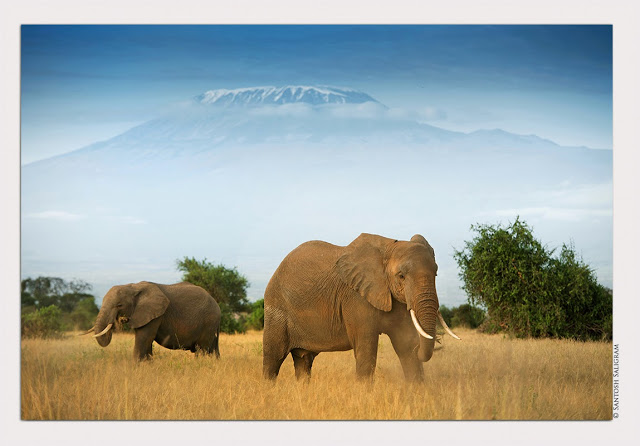 Amboseli had made my first visit unforgettable.  And the Towers of Peace had ensured it wouldn’t be the last.