Skip to content
Since I discovered the immensely pleasurable activity of watching tigers in 2006, I’ve had the privilege of visiting 17 tiger reserves, and each of these has been special, but none towers over my consciousness as a certain park, in an overwhelming sort of way.

That name occupies so much space in my heart, that I think it necessary to host it in a line of its own, ungrouped with the clutter of seemingly less meaningful words.

When I think of it, a smile of familial fondness graces my lips and a wistful swirl of memories descends upon my brows.  I feel infinitely fortunate to have known this place, because it hasn’t just been a park; it’s been my spiritual home. It hasn’t been merely benevolent; it’s been an alchemical force.  And in the words of Michael ‘Nick’ Nichols, one of my most loved photographers, it’s made me a part of it and given me a voice.

Interestingly, though, it wasn’t my first choice to seek photographing a tiger, back in 2006.  That place was Kanha, probably because it was more accessible and renowned at that time, immortalised by that famous film on Lakshmi (with an epic zoom-out shot of a mahout riding an elephant through a misty Kanha-meadow, with Sir David’s sonorous voice in the commentary).

But very soon, a few inspirations in the media galvanised me to head, at the next precious vacation, to Bandhavgarh instead of returning to Kanha.  These included two films – National Geographic’s The Temple of Tigers, which had some splendid footage of an indomitable Charger bonding with  a very small B2, and heartbreaking scenes of Charger’s eventual decline; and a documentary on Nichols’s groundbreaking camera-trap work – apart from Stephen Mills’s book, Tiger, in which he described Bandhavgarh as a “very pretty park” and demonstrated the compliment with many amazing images thence.

Then there were the stories of phenomenal tiger sightings.  Recent visitors reported seeing a dozen tigers over the course of a four-day trip, and multiple tigers on each safari – statistics that had roughly the same gravity to me as facts pertaining to the size and mass of the solar system. Naturally, they made my head reel out of orbit and heart race out of my ribs.  And the thought that B2 was still there at large, and that I could meet him, was impossible to resist.

So off I went to Bandhavgarh in May 2007, to set foot on its hallowed ground for the first time as a dreamy-eyed pilgrim, to finally see in flesh what my mind had for long woven vivid imaginations.

And it wasn’t so much that it met my lofty expectations, rewarding me with a tiger-find in just the first two hours of the first safari (image below), with many more over the rest of the trip, that caused me to be irreversibly besotted with it as an ardent devotee for life.  What hit me was how it reduced all my expectations to just one – of being there.

It was love at first light!


Very quickly it became hard not to notice how everything about this place left me enthralled, absorbed, fascinated.

The variety in habitat was one, with rugged, bamboo-covered hills complementing sublime grass-clad meadows lined with sal trees sporting their cheerful green even at the height of summer, and the winding roads affording access to even the remotest precincts, and brow-brushing thickets resounding to the noise of the cicadas, and archaeological wondrousness merging consummately with natural wealth.

Bandhavgarh seemed to be the utopian melting-pot of man and nature.

The peerless beauty of the tigers was another – I very quickly came to conclude that Bandhavgarh’s tigers, especially the progeny of the Charger-B2 lineage, were the best-looking tigers on the planet.  I’m not sure if this was a case of love making me blind or more perceptive, but in my eyes no tiger could look better than a Bandhavgarh tiger.  There was, on its face, a certain establishment of evolutionary finality vis-à-vis visual design and aesthetics.

Then there was the genuine passion for the tigers the drivers nursed, with some very solemnly regarding them as gods; the immense knowledge the guides had (I was astounded by their prophetic cognisance of a tiger’s next move), and the extreme dexterity the drivers possessed; and how lightly they carried all this expertise, and how intuitively they worked, and how they’d take a miss as a personal loss; the warmth and affection they lavished openly on visitors, and the delightful stories they told of the forest and its tigers, in their colourful, theatrical style of rumination delivered with an impeccably tobacco-influenced accent, animated prosody and an endless appetite for badinage.

Matching this was the way the staff of even the most inexpensive lodges went about redefining hospitality, waking up at any time of the night to oversee arrival or departure, going to absurd lengths to ensure their guests’ comfort and satisfaction, and greeting them with a heart-warmingly cheerful “tiger mila, sir?” (this question sometimes transforming to an amusingly confident “kitne tiger mile, sir?”) upon every return from a safari.  It seemed the entire town functioned with the singular objective of introducing visitors to the magic of a tiger, and what a splendid place Bandhavgarh was for this purpose.  In no other place or establishment had I come to witness such a profound commonality of cause and unbridled passion shared by a large number of people.

It was little wonder they succeeded, for I was quickly in love with everything – from the chai at the centre of the park and the dhaba outside, to Kakubhai Kothari’s images stunningly displayed at the interpretation centre (image below), and the bird calls that needed a rather sinister-looking lady to turn on the power to work.

Amongst numerous other things, I was also enamoured with the magnificent domesticated-elephants, who carried their burden with humbling grace; the cattle that lazed on the main road with enviable insouciance; the watchtower-like entry office at the Tala gate; and the splash the safari vehicles would make while fording the stream en route to it, and the sole wine-store in the hamlet that allowed us to celebrate our cherished moments!

But the piece de resistance of this feast was an inexplicable undercurrent of belonging and kinship; a spiritual connect that exceeded rationality.  Just being there, breathing the same air as the tigers I loved, able to set off in pursuit of them every morning and evening, made me impossibly joyous; and being elsewhere made me ache to be there instead.

I wasn’t Alice, but this was Wonderland!

And so since that seminal visit, I’ve kept going back, almost by default, as though an unstoppable force has been pulling me towards it.  I’ve visited Bandhavgarh a total of 17 times (I must mention six of which have been leading a Tour for Toehold), clocking over 230 safaris in a total of three core zones and one of the buffer zones of the park, in six different months of the nine-month season – all of which is to say: not as often enough as I’d like, but as often as circumstances have allowed, meanwhile occupied principally by the task of counting the days to my next trip, right from the last day of one.

I’ve stood at Shesh Shaiya with teary eyes,  gasped at the panorama from atop Ganesh Pahadi, beheld an impossibly beautiful sunset behind the Badhaini Hill from Chakradhara, heard the cherubic gurgle of the stream at Sidhbaba, witnessed the water change its colour at Gopalpur, felt the earth reverberate at Jhorjhora and snaked through the darkness of Jamunia.

I’ve rejoiced in the freshness of Pateeha, surrendered to the maze of Bhool Bhulaiya, breathed the drama of Dabhadol, negotiated the precipitous paths of Rampur, fallen into raptures at Ghodademon, felt the serenity of Banbehi, espied the changing forms of Damnar, gazed into infinity at Rajbehra, caught the reflection of paradise at Enicut, warmed my soul in Hardiha, and shuddered at the edge of Mirchani.

But the most pivotal part of the experience has been the generosity of opportunities to follow the triumphs and the trials of the heroes of the park: the tigers.  Opportunity to get to know them – above everything else – as the unique individuals they are, with all their idiosyncrasies.

Opportunity to watch them grow from callow and scrawny, through adorable and silly, to big, serious, mature, frightening and redoubtable; to see them handle situations, make history, flower, win, lose, triumph and perish, and pass on the baton to the changelings; to admire them flaunting an ungainly tail, or a pair of oversized ears, or a belly too full to move, or a swagger to swoon at, or a shyness to bemoan, with nothing but innocence and sincerity.

In my pursuit of them I’ve been astounded, amused, perplexed, frustrated, terrified, heartbroken and elated, but never left tepid. For being in their presence, and let into their boudoir of privacy even in their most vulnerable moments, to witness, record and share but a few precious winks of their ephemeral lives, has been an unsurpassed privilege and a source of immeasurable joy.

And so I thought of compiling a list of every tiger I’ve ever seen in Bandhavgarh, as a page of reflection and tribute to this phenomenal place and its exceptional inhabitants.  This is a credit plate of all the apples of my eyes, because each of them has added to my life, and kept the doctor away.

1. This is by no means a comprehensive list of tigers recorded in Bandhavgarh.  Plenty of people, including some senior naturalists, have documented far more tigers, from much earlier.  This is just my personal list of tigers I have seen there since May 2007.

2. This list was first made and published in April 2016.  I will update it every time I see a new Bandhavgarh tiger.

3. The ‘first seen’ or ‘seen’ date indicated is not general, but the first time or the only time I saw the tiger.  Mention of ‘seen’ instead of ‘first seen’ indicates that I got to see the tiger only once, and it’s now known to be deceased.

4. You can click on a hyperlinked name (in blue font) to be taken to a story or page on that tiger.  For some tigers that don’t feature much or at all in my stories or posts, I’ve included pictures inline with the text.

5. The appearance of the tigers is not in chronological order of sighting.  I have mentioned the males first, not due to gender bias, but because there are fewer of them on my list, so the frequency of future additions upsetting the serial numbers will be lower. The females and cubs appear later, in a not-perfect order of approximate seniority, with the tigresses I’ve known very little about appearing right at the end. 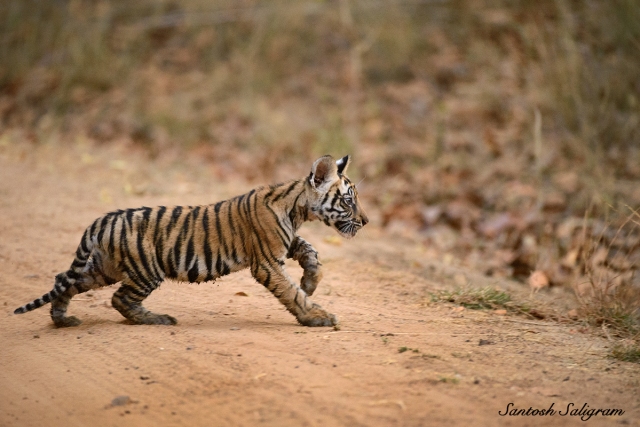