Skip to content
When the sun shone bright and life wore pink,

And the armour had in it no chink.
The world was free and the world was fair,
And we had in it not a trivial care.
Life was a song and life was a dance,
And for misery there was but no chance.
Now those times have bid goodbye,
Given us pain and made us cry.
The woods are green but the soul is parched,
Pink’s turned red and the blood is starched.
The sun is high in the azure sky,
But the listless spirit wears on sore and dry.
I wonder if the jungle’s wet
Or damp are the eyes that are closely set.

Whence are the days gone?

When I could fly,
Free my hands and not be shy. 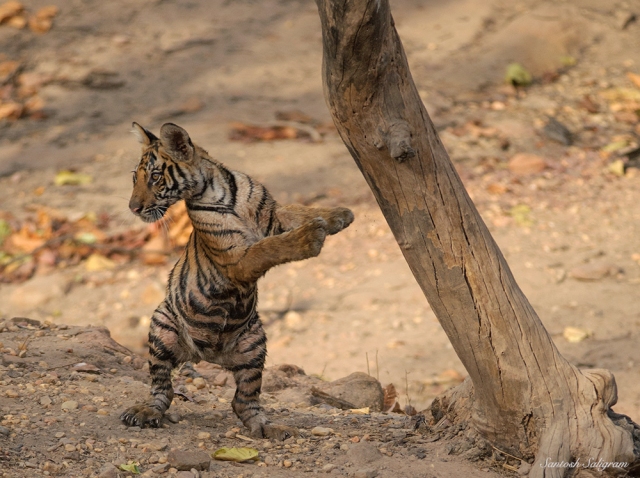 Watching the Jhurjhura cubs put on an extravaganza of cuteness was immense fun, and my friend, Roy, suggested the title, ‘Kung-fu Tigga’, the moment this picture was taken. Little did we know that by the time we’d return home, this moment would become cruelly destined to be served with a melancholy threnody rather than with the uplifting words of gaiety. And so what must have been a portrayal of insouciance, stands now starkly as a macabre innuendo to the horrific severance of support and the grim repercussions of it. I hope that this picture will be a vivid reminder of how quickly and how badly things can turn for the worse in the fragile and embattled life of tigers, and how even at the height of a tiger’s insouciance, complacency is not a trait their protectors should foster.  But for now, let us wish well for the cubs to claw themselves out of the deep abyss of desolation they’ve been pushed into, and hope that they make it through against all odds.